Are You In Mortgage Debt? Your Lender Stole Your Mortgage Note Loan 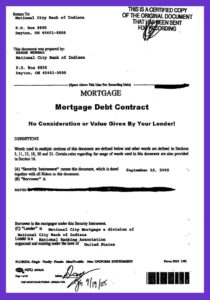 First you must know that the federal government took America off the gold standard in1933, during a staged bankruptcy called the “Great Depression” and replaced the gold with an economic principle known as “Negotiable Debt Instruments (NOTES) including Federal Reserve note and promissory note. The government created a catastrophe discovered by behaviorists and implemented standards that were designed to steal your possessions and God-given rights under the original Constitution FOR the united States of America and NOT the current Constitution BY the United States of America bankrupt government after your Constitution was RE-written BY the United States in 1871

When the government takes away your food, comfort, and safety long enough, you will never care or question the illusion provided, as long as your stomach is full, you have shelter, a comfortable bed, and the means (real or imagined) to keep or continue your comfort. This is why wars are fought.

This is why your loan debts are pre-paid by the Government, if you only knew how to pay your debts using the Government’s Money. Now you can with the Department of Debt Loan Payoff at DebtLoanPayoff.com. Visit today and become Debt-FREE.

June, 5, 1933, President Roosevelt, unconstitutionally, collected America’s gold by Executive Order, HJR 192, among others, and sold it to the Vatican by way of China and England to conceal its true ownership. Commerce now essentially trades in “debts.” So if you borrowed money for a mortgage and there’s no gold or real value to support the paper called U. S. Currency or Federal Reserve Notes, what did you actually borrow? You borrowed debt that you pay back with your labor and sweat.

The mortgage company committed the ultimate fraud against you, because they loaned you nothing to pay off the imaginary balance. Then you were told that you owe them the unpaid balance of your home and that you must pay them back, with interest, in monthly installments. The practice of the lender’s failing to disclose these facts in your mortgage agreement voids and nullifies the note because it violates 12 CFR 226.17(c)(1) of the Truth in Lending Law.

The Promissory Note that you signed giving the bank or mortgage lender the first loan was stolen from you. At the secret second closing when the lender stamped the “Pay TO The Order Of…Without Recourse” on your promissory note, changed it into a negotiable security instrument. Your lender made your promise to pay into a negotiable debt instrument and cashed your note in at the reserve window of the U S Treasury as an exchange, not a loan, and then gave you an alleged loan where you have to pay it back with interest. They did not repay your first loan to them under accounting and bookkeeping GAAP.

Did you receive any check or money at your closing? Of course Not; therefore, no one loaned you any money or anything of value. A check was written to the Escrow or closing company. Does this mean that they received the alleged loan that you were supposed to receive. BUT your NOTE states the you borrowed the money with the promise to repay the note and mortgage.

Both the Mortgage contract and Note were written by the lender with no consideration. Ask them to explain both of these for you in simple, truthful, English. They cannot their own contract or note. A valid contract, by contract law, states that value and consideration must be given by both parties. You are the one that gave value and consideration with your debt signature and repayment of the alleged note and mortgage loan and the lender gave you more debt… not a mortgage loan as they pretended to give you.